How to Respond to “We Don’t Work with Outside Vendors” 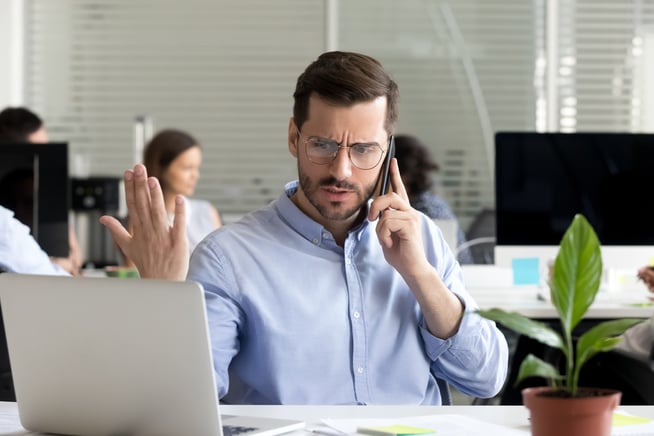 As a seller, hearing “We don’t work with outside vendors” or “We don’t work with third parties” from a prospect is incredibly frustrating; and not just because its used so frequently. There is a lot of irony in that statement, because if every company in the world abided by that maxim, nobody would ever sell anything. And the roughly 9 million non-retail sales people in the US alone say more than I ever could about how realistic that is.

However, as most sellers know, directly challenging a prospect will only raise their guard and lead to more hesitation. Contesting the assertion that “they don’t work with outside vendors” is no exception. However, there is an approach a seller can take when they hear we don’t work with third parties from a prospect that is both professional and rapport-building.

First, Understand What’s Behind The Reaction

Our research on cold calling indicates that prospects object on a cold call for one of three reasons: not listening, don’t understand and genuinely not interested. The majority of the time, when a prospect says they don’t work with third-parties, they typically aren’t listening.

This reaction happens in the first part of the cold call when the prospect is thinking to themselves: “This person is calling me out of the blue, I don’t know them. How can I get them off the phone as fast as possible?” Prospects will typically offer some generic phrase that precludes any sales opportunity, and most sellers give up – but they shouldn’t!

System 1 thinking is your automatic response way of thinking, and humans on a daily basis are in System 1 to conserve energy and brainpower for other more important tasks. System 2 is the opposite of automatic thinking, and is when the brain is fully engaged with the task at hand.

When a seller calls a prospect, they initially are in an automatic way of thinking, and by breaking that, sellers can engage with a prospect in a more meaningful way. When your sellers receive a response of “we don’t work with outside vendors”, the prospect is most likely in System 1 and the focus should be to break the prospects thinking pattern to get them into System 2.

For a seller to get move the prospect from System 1 into System 2, they need to break the automatic system. To break it, sellers need to show empathy to the prospect and share with them something that the prospect is surprised that they know about them or an insight to them about their peer group.

Sellers should not give up after a prospect tells them on a cold call they don’t work with third parties, instead, they need to understand that the reaction is part of an automatic system and they can take certain steps to break it.

When it comes to refining your prospecting efforts, there’s no substitute for data-backed insights. These cold calling tips and techniques emerged from our study of thousands of cold calls, and you can put them to use and see improvement right away.

Want to train your team in proven cold calling  tips and other prospecting techniques? Check out our comprehensive guide to sales prospecting, based on an analysis of 100,000 sales calls.