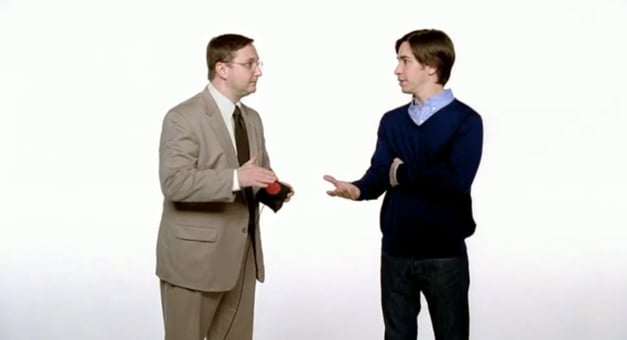 During a meeting the other day here at Funnel Clarity, our co-founder and managing partner, Tom Snyder, shared something that really resonated with me:

After two months on the Marketing team at Funnel Clarity, sage wisdom from my higher-ups was nothing new. But the more I thought about this concept I realized the immense truth it holds for salespeople.

If a company has an innovative offering or product, customers aren’t likely to fully understand the value. The seller must help the customer see how the new product can better their life.

On the other end of the spectrum, companies who sell into more established markets—floor covering was our example—face better informed consumers. They wouldn’t want information on flooring, but an explanation on why your flooring is better than what they have. In a mature marketplace, good prospects probably already own a competing product.

This is a crucial distinction that ultimately dictates how a seller or marketer positions a product. It’s also supported by the advertising trends of the technology giant, Apple.

In 2007, Apple was entering a (relatively) new market with the release of the first iPhone. Blackberry had already brought mobile email access to the business world, but web browsing on your phone was still a foreign concept to the average user.

Apple knew this. So their first batch of commercials to market the iPhone clearly demonstrated some cool practical uses for the phone.

This commercial depicts a very realistic scenario where a user is watching a movie on their phone (remember the days when that was special?) and develops a taste for seafood. Apple then shows you how an iPhone can help you satisfy that desire simply and efficiently. This commercial is a textbook example of creating a vision for an innovative product.

Fast forward 8 years and 5 iPhone models and smartphones are nearly ubiquitous. This is in part due to the way Apple positioned their initial iPhone offering, also fueled by rapid technology development. The smartphone market has matured considerably, and the average consumer is now familiar with several versions and brands.

Apple reacted to this marketplace shift by advertising the iPhone 6 in an entirely different way.

The “Shot on iPhone 6” campaign differentiates the iPhone from its many competitors. These ads use high quality photography or video with an attribution to the creator, whom we are led to believe is just a regular iPhone 6 owner. The iPhone’s camera is particularly good compared to other phones, so that is a particularly strong product feature to differentiate on.

This commercial shows a beautiful scene that was shot on an iPhone 6. Apple doesn’t waste any time educating the audience, knowing that by now, most viewers have taken pictures on a phone. The ‘vision’ of how a camera phone can impact their life is already there. So Apple differentiates by distinguishing the quality of image that only their phone can produce.

Differentiation is difficult, and it’s a task that many brands have pursued aggressively as of late. There’s a fine line between setting yourself apart and slandering the competition.

Taco Bell toed this line well when they released their breakfast menu. The “Ronald McDonald” campaign was fondly received, and clearly differentiated without animosity.

Taco Bell demonstrated good market awareness with this campaign. Although breakfast was a new offering for them, they understood that fast food breakfast is a very mature market. So rather than talk about the benefits of being able to get Taco Bell early, they differentiated themselves as the better fast food breakfast option.

This commercial skips the subtlety and compares Slim Jim to its generic competitors side by side with a simple pan back and forth. They use props like a moustache and sunglasses vs. a possum and diaper to crudely portray Slim Jim as masculine and their competitors as weak. Apparently this is how Slim Jim believes their consumers discern between choices.

For B2B sellers, Slim Jim offers an example of differentiation gone too far. The B2C world is permitted greater advertising freedom with customers. Still, brands like Apple and Taco Bell provide good inspiration on how to subtly reinforce your strengths. When it comes to your clients, an awareness of the relevant marketplace dynamic is indispensable.

And it’s up to the seller and the marketer to understand where their product exists. At Funnel Clarity, we pride ourselves on the ability to cater sales training to the needs of your business and your industry.

Are you trying to drive revenue with an innovative product? 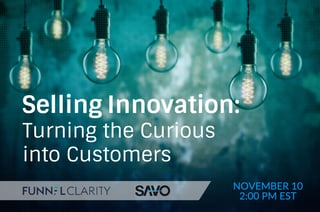 Watch the webinar with SAVO Group: