Cold Calling From Your Prospect’s Perspective 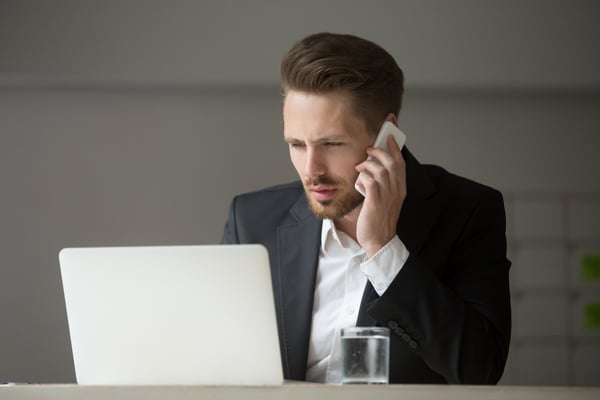 Have you ever found yourself sitting at your desk with absolutely nothing to do, praying you would receive a random call from a sales person you don’t know? I’m willing to bet the chances are almost zero. More likely, you’ve experienced something like this: you are engrossed in something important when your phone rings and you pick up without stopping to check the number. In the same instant, you realize that the person on the other end is speaking in that weird tone of voice that immediately reveals this to be a cold call.

Given that most cold calls take the shape of this sort of unwelcome interruption, is it any wonder why so many sellers cling to the myth that “cold calling is dead” or that, “prospecting doesn’t work”? Would you be surprised to learn that the data on prospecting utterly destroys those myths? The key lies in understanding the prospect’s perspective on receiving emails, voicemails, social media messages or phone calls from sellers they don’t know and who have no appointment on their calendar.

Most sellers would be shocked to learn that marketing research firm MarketingSherpa found that 53% of the executives said that a sales call catapulted vendors onto their “shortlist.” Similarly, DiscoverOrg did a survey across 1000 senior executives in IT. Over 75% of executives surveyed said that they have attended an event or taken an appointment that came to them by cold call or email. As always, selling is about understanding the buyer’s perspective. Probably nowhere is this more important than when sellers are cold calling. Our research has revealed that prospects consistently echo four major complaints:

“Sellers who prospect me simply want to pitch me their product or service….and I am not interested.”

Most sellers would probably agree that this is a pretty common complaint. And it is understandable; prospects legitimately believe their time is too valuable to listen to an unsolicited pitch. But, sellers already know that. The data our training is based on indicates that the real problem is when the caller doesn’t acknowledge the interruption. Too often, the caller simply plows ahead with a nervous tone and a false sense of familiarity.

“Hi Bob, this is Tom with EFG.  I know I caught you unexpectedly, do you have five minutes for a quick conversation?”

This alone will improve the odds of a successful cold call. It isn’t flawless. It can get a response that sounds like, “I am really busy at the moment” or “I am preparing for a meeting” or some other polite version of “no”. But, by merely acknowledging that you have interrupted the prospect’s day makes it is dramatically more likely you will have a productive conversation. It also sets up the seller for the most important step of all: generating curiosity on the part of the prospect.

“The seller is trying to sell me.”

In our evaluation of more than 100,000 recorded prospecting calls and emails, it was clear that most sellers conveyed the wrong message in their prospecting efforts. Most sellers sounded like they were trying to compress the entire sales cycle into a breathless few minutes of presentation and/or a few lines of text.  Does that make sense? Does anyone receive an unsolicited message describing a product or service and immediately issue a PO?  Of course not.

There are a series of steps to successful prospecting, but the first is to recognize that the purpose of prospecting is to set an appointment with a prospective buyer, not make a sale.  That means that a seller has to first arouse curiosity and then earn enough credibility that the prospect will open the door for a short conversation. Even if the prospect were to indicate interest in a sales pitch, a great prospector knows to resist that siren’s song. A successful prospecting call or email has one goal in mind: a calendar appointment and enough information such that the first actual sales call will be successful.

“The prospector sounds scripted and robotic.”

Whether it's a phone call or an email, if the outreach sounds scripted, it immediately de-credentials the sales person. Nothing tells a prospect that they are just a name on a list like sounding rehearsed or scripted.  Making matters worse, sellers often use the prospect’s wrong name. If your name is Richard but you go by Rick, what reaction will you have when an unfamiliar caller refers to you as Richard?

A bit of preparation goes a long way to not sounding like a machine. After all, technology now enables scripted calls that don’t require a human being, so it’s up to human sellers to add value.

“The prospector knows nothing about me and/or my company.”

With platforms like LinkedIn readily available to everyone, is there any excuse not to have some basic knowledge about the person you are cold calling? Is it so difficult to do some research on your prospect, the company they work for and role they play?

For example, I publish my cell phone number in the heading of my LinkedIn profile. I find it strange that very few sellers call me as a prospect. More surprisingly, when they do, they quickly demonstrate that they have no idea what my company does, know nothing about my background or interests and clearly got my name and number off of some purchased list. Predictably, the information they do have is usually dated or just plain wrong.

It’s particularly frustrating because it is so easy to avoid this mistake. A quick look at any database like LinkedIn will provide a wealth of information about the person and/or the company. If that quick look doesn’t reveal much, try cold calling a random employee at the company and asking a few simple questions about the individual. (Accounts Receivable and Sales are departments that almost always answer their phones).

If you take this latter approach, please, please be sure to be completely transparent. Whatever you do, please do not lie or hide your intentions. A simple request for some help about preparing to call on their colleague is always the best approach.

In sum, sales prospecting, when done correctly, is the single best way to fill the top of a sales funnel with new qualified leads (stop blaming Marketing). Following the steps that research has revealed will amplify the success of your prospecting calls, emails, voice mails and social media outreach by 300% to 400%. Step one in that regard is to avoid the four deadly mistakes most prospectors make when cold calling or emailing.

Want to train your team in proven prospecting techniques? Check out our comprehensive guide to sales prospecting, based on an analysis of 100,000 sales calls.